Item Number: P103
Shape Type: Advertising Plate
Pattern Name: Standard Willow Border
Date: c. 1870-1890
Dimensions: D 2.75″
Maker: Unknown
Maker’s Mark: Unmarked
Description:
A small earthenware advertising plate printed in brown underglaze with the Standard Willow border with a central pattern of a collage of urns, jugs, cups and plates. The dominant figure in the central pattern is an urn with an unidentified symbol in a center circle. 2.75″ in diameter. Advertising reads “Abram French & Co.. Boston” Maker unknown, c 1880-1890. Abram French was a china and glass retailer in Boston, established in 1822 surviving until 1902 when it went into bankruptcy. The New York Times, on June 23, 1885, reported that “a serious fire [occurred in the company’s] large four-story brick block corner of Franklin and Devonshire streets, [Boston] occupied by the extensive glassware and crockery establishment of Abram French & Co.” It was reported that most of the firm’s $300,000 in stock was destroyed.
Condition: Good condition with a few tiny edge chips and an 1.5″ hairline. 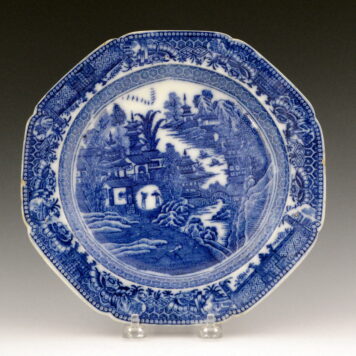 THIS ITEM HAS BEEN SOLD.  THANK YOU.

This plate is now in the permanent collection of the Potteries Museum, Stoke-on-Trent, UK. 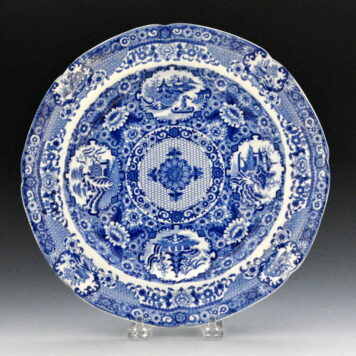 THIS ITEM HAS BEEN SOLD.  THANK YOU.